Now that I have completed all the races in the Historic Series, I have removed most of the information about it from the site. What is left is the results pages and this page which shows images of all the different types of car that ran in the series.

This is Jack Brabham in the works Cooper Climax T.53.

Jim Clark is the driver in this works Lotus Climax 18.

This is supposed to be a 1960 Ferrari Dino, with Phil Hill in the car.
I think it is one of the poorer models in the series.

The Rob Walker Lotus Climax 18 of Stirling Moss.
A great driver in a great little car.

Yeoman Credit Racing Team Cooper Climax T.51.
The driver is the very talented Chris Bristow - sadly lost to us at Spa in 1960.

This is the Ferrari engined Cooper that was always entered as a Cooper Castellotti,
in honour of that great Italian driver.   Gino Munaron is the driver in this car

Being rich helped Lance Reventlow to fulfil a dream by building and racing this American built Scarab.
Sadly, it was behind the times - but what a pretty car!

A one off, this one.
Harry Schell ran a Cooper Climax T.53 in just one Grand Prix -
the United States Grand Prix at Sebring, 1959.

This is the rear-engined, experimental Ferrari that Richie Ginther drove at Monaco in 1960.
I don't know of any other slot race model of this car.

An old front-engined Lotus Climax 16. This is the car of Bruce Halford....

...while this is a similar car belonging to David Piper.
Naughty me ! I never got around to fitting a windscreen to this car.

Aston Martin tried Formula 1 with this car.
It is the DBR1-250. This one is driven by Carroll Shelby.

Many drivers purchased Cooper Climaxes and ran them as private entries
This is the car of the Dutch Count Carel Godin de Beaufort.

A few months back I finally built 2 new, rear-engined BRM's.
Here they are with drivers Graham Hill and Jo Bonnier.

Another private Cooper Climax.
This is a Belgian-owned car that was driven by Willy Mairesse. 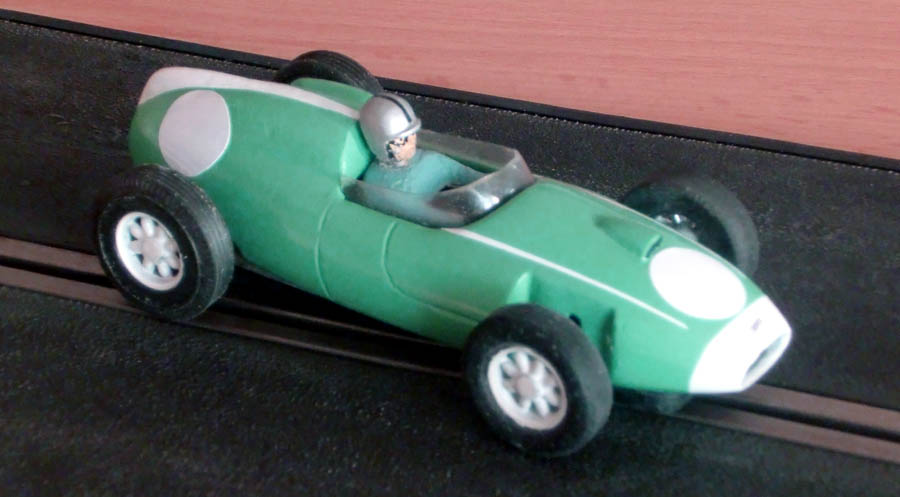 C.T. (Tommy) Atkins bought a Cooper Climax T.53.
It did not race often but when it did, I put Roy Salvadori in it.

And finally, just for Monaco, Ferrari chopped the noses of their front-engined cars.
They did not look pretty but they handled the tight corners much better.
This is Dan Gurney's car - the sister car of Wolfgang von Trips won my Monaco Grand Prix.

......and that is the end of the road for this series of cars.
A few of them will be used in the new series but the rest will be broken up.

If you would like to see the results of the races I have run in my HISTORIC series, click here.

For more details about this series of cars, go to the HISTORICS page.